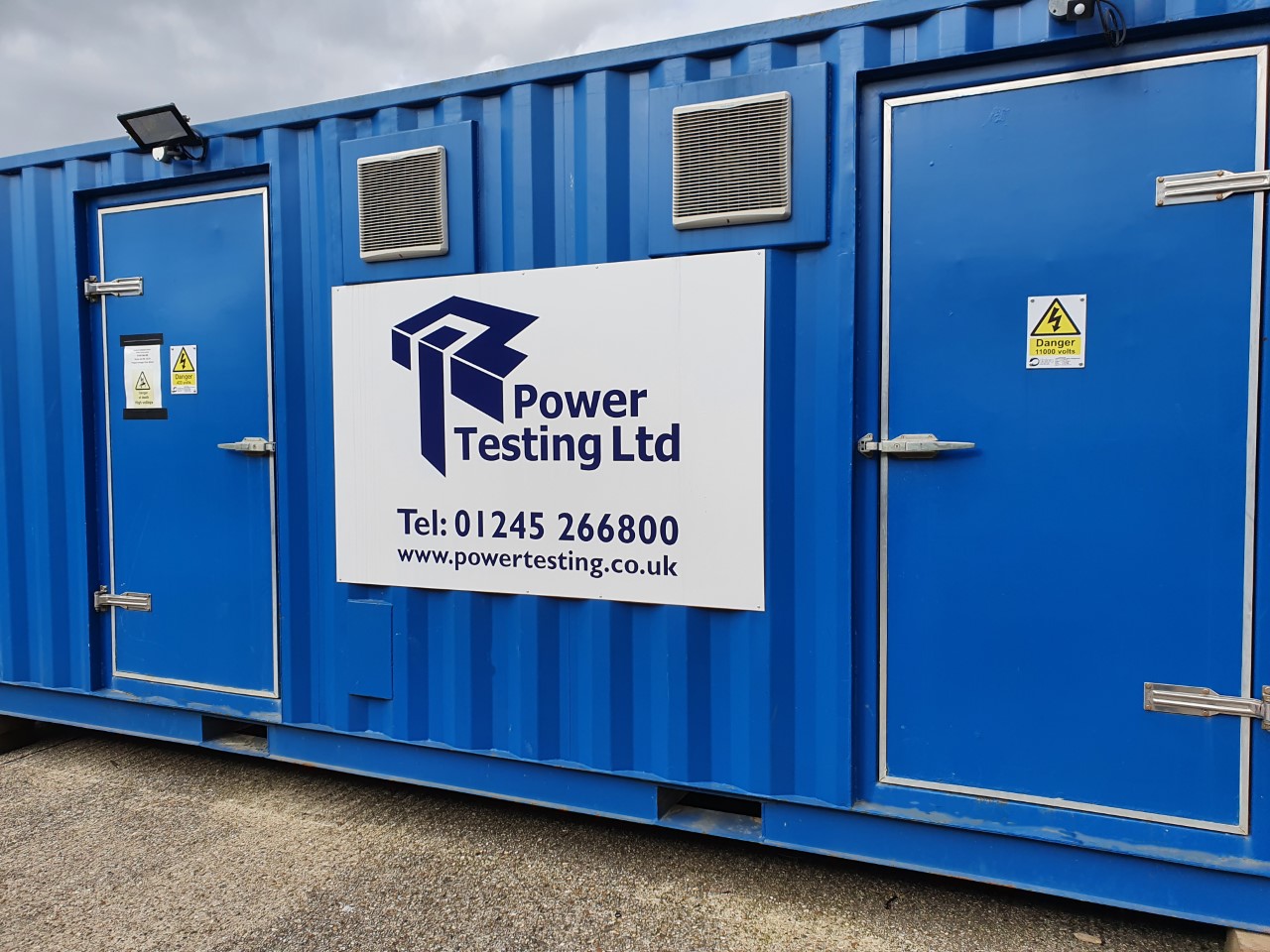 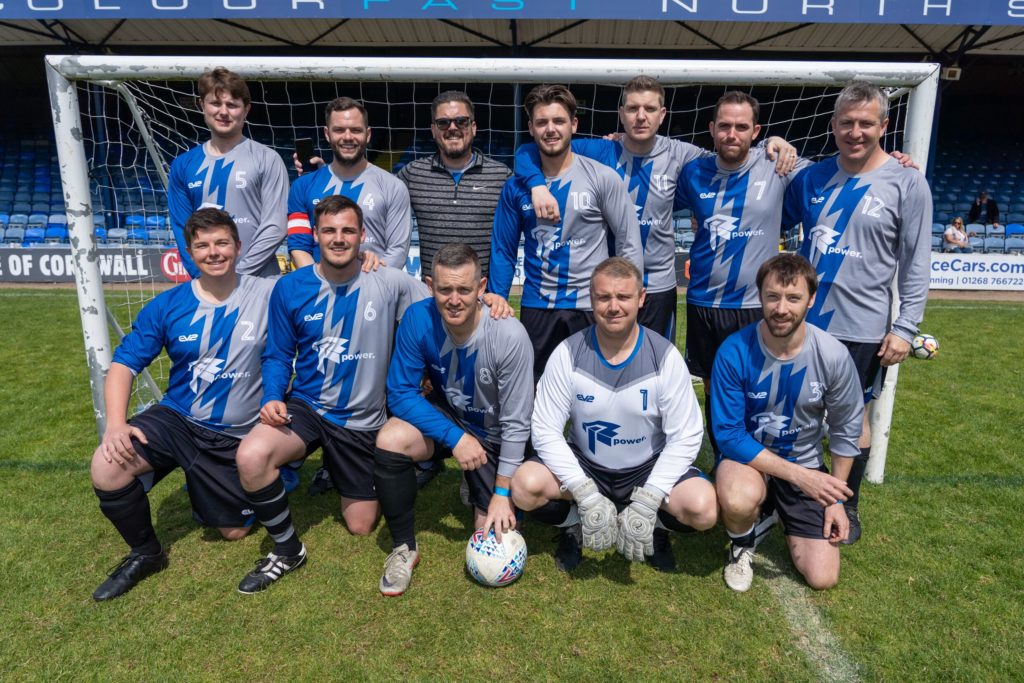 In the build up to the event, everyone got involved in some way, whether it be taking part in weekly training sessions, designing the kit, fundraising or coming up with the team name – The Power Rangers!

After 3 months of training and with a relatively healthy looking squad of 11, the mighty Power Rangers Manager, Chris Park, was confident, as was captain Rob Knight.

The team arrived at 8am full of anticipation and excitement for the day ahead.  After inductions were complete and a few confidence building smashes in the full size goals, the supporters started to arrive, lifting spirits even higher.  It was clear that the Power Rangers had the largest and most vocal support throughout the day with several work mates making an appearance (the ones not working the weekend) as well as family and friends, making the day even more special.  And also making the butterflies and nerves increase!

But the team need to worry – when it came to kick off for their first group game at 9.30am, the day got off to a great start with a comprehensive 4-1 win, with goals from Johnny Bailey, Dan Cann, Ellis Park and Brad Manning, with all 11 squad members getting on the pitch and contributing in a devastating display.  Some flowing moves and great finishes capped off a great first win.  The sole goal conceded came from a referee error, who wrongly awarded a penalty from a back pass (much to John Marshall’s disgust)!

The 2nd game was a real challenge, with the Power Rangers taking an early lead through Dan Cann’s left wand, initially stunning the keeper with his initial shot and then putting in the rebound.  But the game was shaping up to be a real battle with the team taking some hard and quite frankly, uncalled for and unnecessary challenges.  The game ended 1-1 thanks to some smart saves from John Marshall in goal but they all survived some horrendous tackles and managed to keep their heads – even when Dylan Green was one on one with the keeper and was hacked down from behind for a blatant professional foul.  It was clear things were getting serious and there were extremely competitive teams taking part.

With approximately 90 minutes between the group games, it was extremely tempting to head to the bar for a few pints or indulge in the traditional pie or foot long – but the boys remained focused and instead reverted to professional looking stretches to keep them from stiffening up.

The final group game kicked off at 1pm with the team knowing that only a win would guarantee their path to the knockout stages.  This midway point during the day also saw further Power Rangers supporters turn up, swelling the numbers cheering the team on to way above 50.  And the boys didn’t disappoint. After taking an early 2 goal lead through Johnny Bailey and Dan Cann, they pulled a goal back, again through a dubious penalty.  As tensions rose, a quick-fire double from Ellis Park and a 5th from super sub Chris Williamson sealed a great win and progress to the last 16.

A commanding 3-0 win in the last 16, thanks to goals from Dan Cann again, Chris Williamson and Rob Knight sealed a comprehensive win and took the team to the quarter finals stage.

The games were now coming thick and fast – with the quarter final immediately after the last 16 win.  And so were the injuries, with several of the team struggling, including Dan Cann, the team’s focal point and top scorer, who started the next game on the bench.

The quarter final was a dull affair in terms of goal mouth action, with both teams staying tight to one another and nullifying goal threats.  However, John had to be at his best to deal with a couple of long range pearlers that were heading into the top corner.  The game was descending into a nasty battle, with the boys taking many hard tackles and plenty of abuse from the opposition, who were trying to influence the ref at every opportunity.  Tom Hughes, Johnny Bailey and Dave Betson stood up to the challenge and dished out some of their own tackling, which the other team didn’t take too kindly too!  The game looked to be heading for extra time when Dan Cann entered the pitch with only a few minutes left.  Playing to his strengths, Dan Cann received the ball with his back to goal, held off the defender, turned and shot ferociously with that left haymaker of a foot into the bottom corner for a 1-0 win, made even sweeter after the abuse some of the lads had received.

The semi-final beckoned against pre-tournament favourites TKS.  It turned out to be a tight and tense affair, with few chances.  But with 8 minutes remaining, TKS hit the power rangers with a sucker punch to take the lead.  As the Power Rangers pushed on and committed men forward, John kept the team in it with several fine and flying saves.  As the final whistle went to end the Power Rangers journey, the sense of disappointment was drowned out by the cheering support and sense of pride for what had been achieved in less than 3 months, against many teams that had been playing together for much longer – and were also much younger than the Power Rangers average age of 30+.

It was at that point that we realised there was to be a 3rd place play off match – against the rather tough team we drew 1-1 with in the group stages, with some of the lads still bearing their battle wounds from that game.  Luckily sense prevailed and an amicable penalty shoot out in the full size goals was agreed – best of out 5.  Dan Crew scored the first with John saving their first effort.  A chance to take a commanding lead but Johnny Bailey’s effort was saved, however, they again missed.  Dan Cann was never going to miss, with a rifled shot into the roof of the net, bringing gasps from the watching crowd.   The opposition scored which meant that Chris Park, the Power Rangers Manager, had the opportunity to seal the shootout win.  As he begun his run up, the crowd were ready to celebrate but the keeper dived to his right and kept it out.  It was then left to Dylan Green to try and make amends next time round – and score he did, sealing the win and 3rd place with it.

The day was a great success, with over £19,000 raised in total for two fantastic and impactful local charities that make a real difference in the community.

Not only did the Power Rangers represent the company superbly, coming a respectable 3rd out of 32 teams and only losing to the eventual winners, TKS.

Not only did the team raise a fantastic £1,265.00 for two great local charities.

But most importantly, the event gave us the opportunity as a company to come together, meet each others families, create great memories together and forge new relationships built on trust and respect – which is absolutely priceless.

We would like to say a massive thank you to the event organisers, the charities, the Power Rangers Team, the roaring supporters & of course thank you to everyone who donated to the worthwhile causes.
And here’s to next year – where the power rangers want to improve on 3rd place and ‘Bring it Home’!